Fans tweeted their reaction of the pre-screening that showed not only the first episode but the second episode as well! 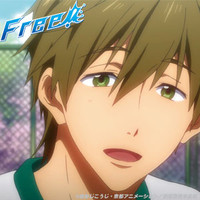 While the fans everywhere are counting days for the broadcast of Free! to start, the pre-screening event of the new KyoAni anime just finished in Japan and the reactions from attendees are appearing on Twitter. Let's see what people thought of the highly anticipated summer anime! Although there are no serious spoilers, please proceed with caution.

The event took place at the Marunouchi Picadilly 3 theater in Tokyo on June 26th. The cast guests were Shimazaki Nobunaga (voice of Nanase Haruka), Suzuki Tatsuhisa (voice of Tachibana Makoto), Miyano Mamoru (voice of Matsuoka Rin), Yonaga Tsubasa (voice of Hazuki Nagisa) and Hirakawa Daisuke (voice of Ryugasaki Rei). Only episode 1 was planned to be shown, but as a surprise, episode 2 was also shown as well as the first half of the "Rage on" music video by OLDCODEX, the anime's opening theme. Attendees were requested to be aware of spoilers after the event and avoid them. These Twitter postings only reflect the personal opinions of the Twitter users and not an official announcement and be aware that some information may not be accurate. 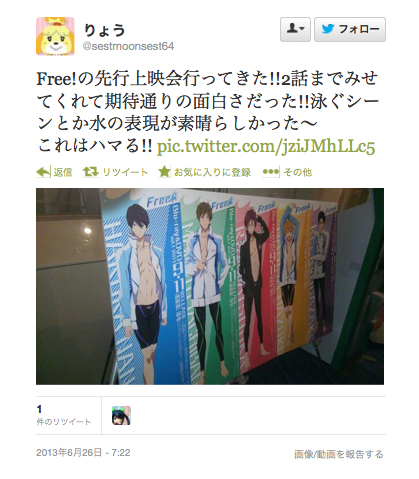 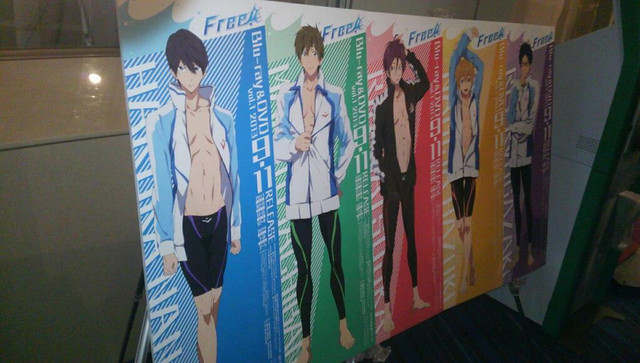 Translation: "Came back from the pre-screening of Free! They also showed us Episode 2, and nothing betrayed my expectations! The swimming scenes and expression of water were amazing~, you can easily get hooked!" 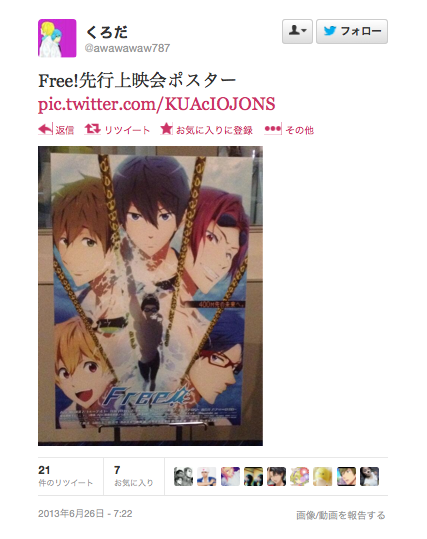 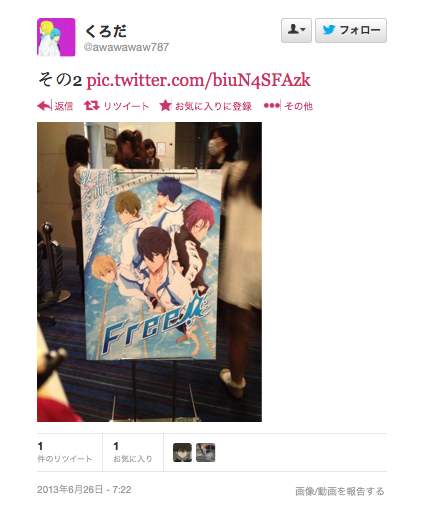 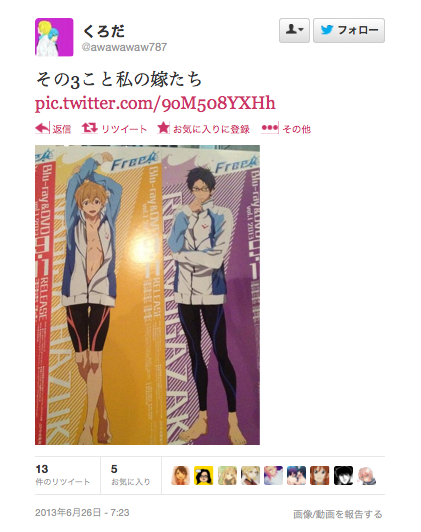 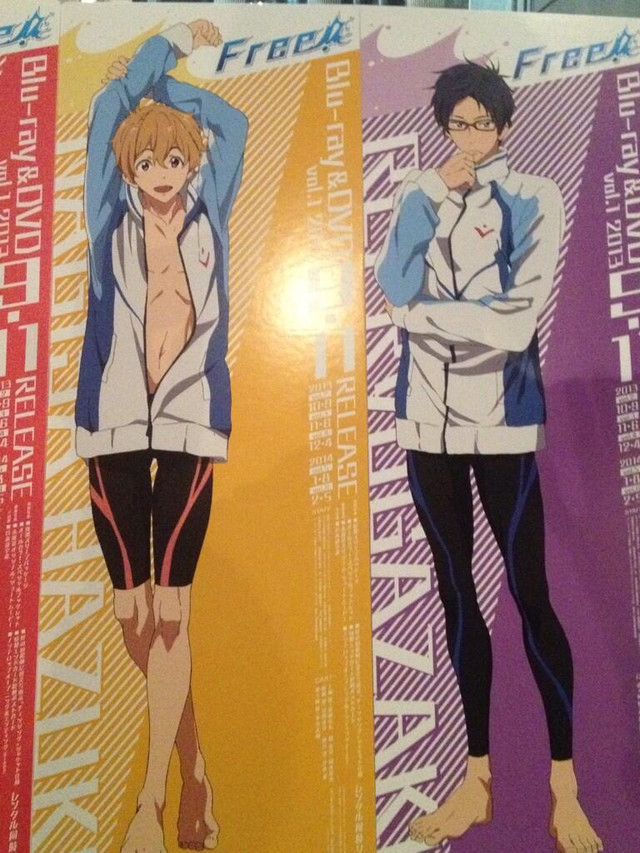 Translation: "#3, otherwise known as my waifus" 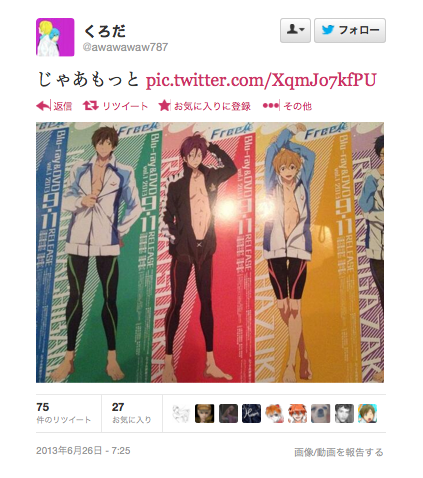 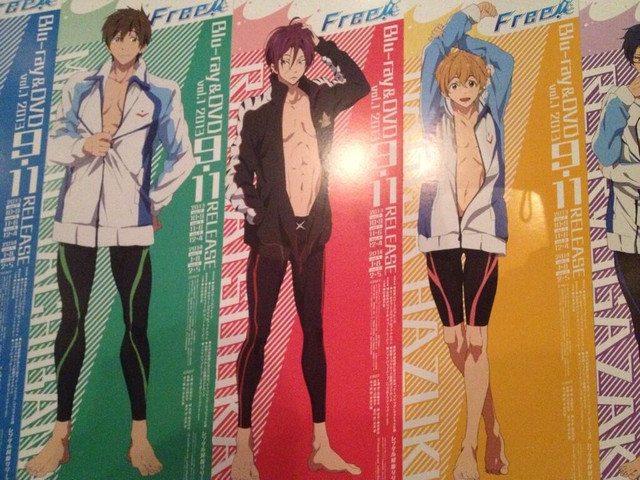 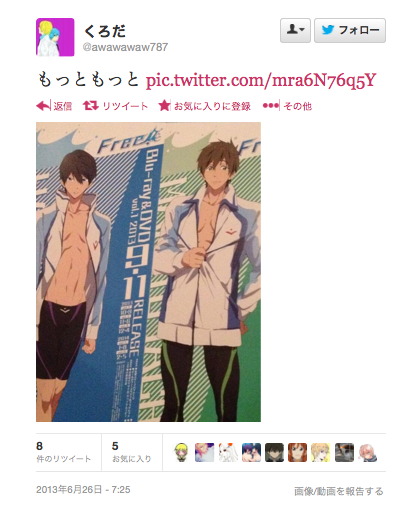 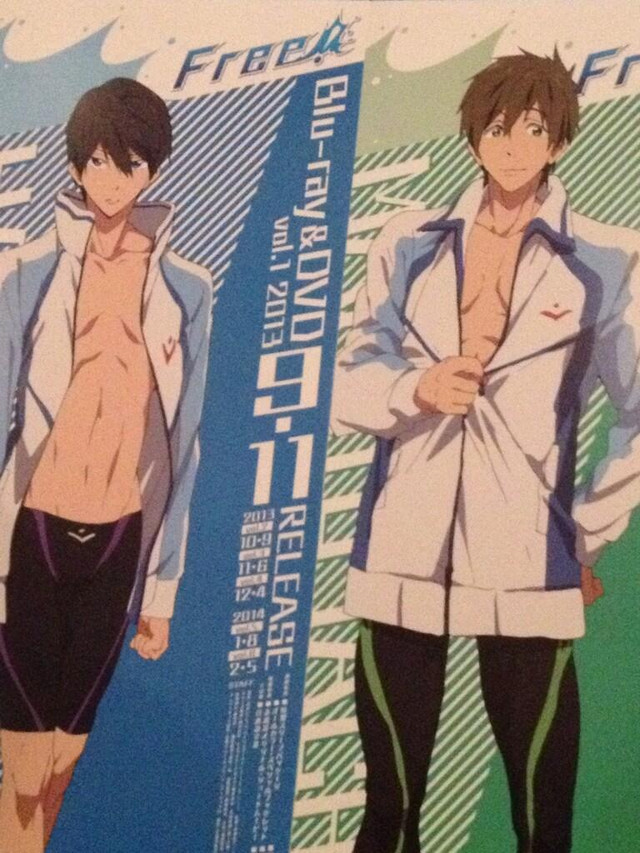 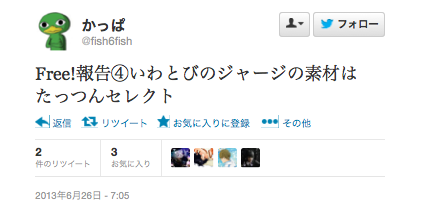 "Free! event report #2, the OP by OCD doesn't sound like a song you can sing by yourself at karaoke"

"Free! event report #3, the ED is ridiculously cute. Both the song and the anime for it. Never thought they would do an Arabien arrangement (I first thought that it was Magi). The first volume of BD will include non-credit versions of the OP & ED. I have to buy it"

"Free! event report #6, they did not run through to episode 2, during the cast talk (after the episode 1), they said there is a surprise and said "What do you think it is, Miyano san?" and Miyano said "Is it my birthday cake?" then they said, "we will show episode 2 as well!" Miyano's birthday was used as a trap LOL"

"Free! event report #7, Tatsuhisa and OLDCODEX rushed to finish the first half of the PV so it can be shown at the event"

"I think it made sense that they showed up to episode 2, because if it was just episode 1, people may have taken it as the anime for the girls in certain demographics, but in episode 2, it calms down and start to look like a KyoAni product. If it can look like that by episode 2, I can definitely expect to enjoy later episodes."

"Animation was wonderful~, beautiful art, and all the characters are so cute ＼(^o^)／ I feel lucky to be able to watch episode 2, too ^^ Can't wait to watch it again on TV (*^^*)"

"Free! episode 1 & 2, OP & ED are all so awesome, but OCD's "Rage on" seriously rocks, really, the PV is super cool, I don't even, and on top of that, there is a part in the lyrics that is diffrent for anime OP!! The special edition CD includes the anime version of lyrics!"

"The character with glasses appeared in episode 2"

"The group name for the ending theme is SPLASH FREE"

"Watched up to episode 2, but there is absolutely nothing lacking!"

"Everybody is dancing in the ending theme! *All naked by the end"

"Looks like the school jerseys are already made since casts were all wearing them...congrats cosplayers!!!"

"Although my favorite character starts to shine from the 3rd episode... dancing Rei in the ED took away everything!!!!!!!!"

"Endng theme starts out with dancing, then Arabien dancing and then they get all naked. I'm serious. Haruka was diving like Lupin LOLOL"

"Rin as a wealthy Arab with lots of water but the rest of them has no water, so Haruka went to look for more water, finds an oasis, then get totally naked" (I wonder if she is using a metaphor...it's the literal translaton)

"The first Bly-ray will be released on September 11th, and a drama CD in August"

"Miyano was asked which character he wants to be friend with and answered "Suzuki Tatsuhisa". Tatsu replied "Me!? Whoa, that was so unexpectedlly fluttering"

These reactions are overwhelmingly positive all the way around! It seems like there is a lot of attention focused on the voice actors and the characters but not much reaction about the story and the anime itself, but I am guessing that is due to the effort of avoding spoiler posting. After hearing about the event, now I am all curious about the ending theme. How about you? What are you looking for in the show?