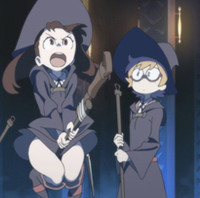 Studio Trigger announced at Anime Expo that they will be launching a Kickstarter campaign to help fund production of Little Witch Academia 2 (Title pending) by offering fans a chance to contribute. The first short received funding from Agency for Cultural Affairs funded Japan Animation Creators Association as part of its Anime Mirai program to foster the talent of young animators while producing half hour shorts.