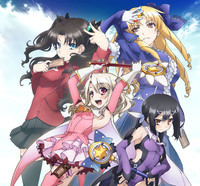 Sentai Filmworks didn't give up on yesterday before announcing two new additions to its anime lineup. The latest pair to be added are Fate/Kaleid Liner Prisma Illya and Kinmoza. As with the other recent announcements, both are set to arrive digitally soon with home video releases to follow in 2014.

Fate/Kaleid Liner Prisma Illya is a fantasy anime located in an alternate universe of the Fate/Stay Night franchise. The series is directed by Shin Oonuma (Dusk Maiden of Amnesia), with series composition by Baka and Test creator Kenji Inoue and character designs by Nozomi Ushijima.

Illyaviel von Einzbern seems like a normal school girl, but all that changes when a magic wand named Ruby decides that young Illya is the perfect choice to be her new “master.”  On the plus side, that means Illya can use Ruby to gain magical powers.  On the negative, Ruby’s previous owner, Rin Tosaka, isn’t exactly thrilled to be de-wanded, especially since she’s just accepted an assignment from the Wizard Zelretch to collect seven magical Class Cards holding legendary spirits inside.  However, since the unbending wand is sticking to its decision, the only solution is for Illya to take up the task while Rin supervises.  Meanwhile, another girl named Miyu has been chosen by the magic wand Sapphire as HER new master, much to the irritation of Sapphire’s previous master, Rin’s arch rival Luvia Edelfelt!  Exactly what kind of plan are the wands conjuring up?  It’s a mystical fantasy set in an alternate universe to the popular Fate/Stay Night franchise, in which some very familiar looking characters end up in some very different and completely unexpected situations!  Prepare to be en-spelled as six magic-challenged maidens hit the road to adventure in Fate/Kaleid Liner Prisma Illya!

Kinmoza!, based on Yui Hara's Kin-iro Mosaic four-panel manga, is a 12-episode series directed by TENSHO, with series composition by Yuniko Ayana (Ground Control to Psychoelectric Girl) and character designs by Kazuyuki Ueda.

When Shinobu was still in middle school, she had the amazing opportunity to study in England while living with a host family as an exchange student.  And while that was several years ago and she still doesn’t do all that well in English class, Shinobu has had warm feelings for everything English ever since.  So when Shinobu learns that the daughter of her host family, Alice Cartelet, is coming to stay with her and study in Japan, she’s thrilled.  But will Alice be able to fit in with Shinobu’s Japanese schoolfriends, Youko and Aya?  And how will the arrival of Shinobu’s old rival Karen, who’s half-English and half-Japanese, affect the potential culture clash?  Every day is an adventure in international diplomacy and self discovery as a group of schoolgirls learn new lessons about each other and themselves in KIMOZA!