Plus live Painting by 2g 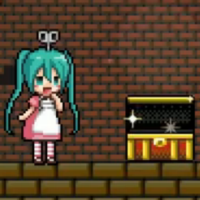 Hatsune Miku's 30ch has posted an interview with sasakure.UK, in which the vocaloid producer discusses his musis' surreal and unique quality, similar in some ways to children's or fantasy literature. During the interview he also discusses the background of his famous song "Hello, planet." and his new song "Twee-box no ningyo gekijyo", before going to mention some of his upcoming plans.

From his popular  "Do Vocaloids Dream of Doomsday Birds? " album