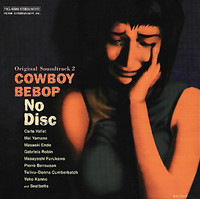 Few conversations about fan favorite anime composers and soundtracks can avoid revolving around the axis of Yoko Kanno. Some of her best regarded work is now arriving in the US iTunes music store thanks to a release by FlyingDog.

Not only is North America getting Yoko Kanno with Seatbelts' three Cowboy Bebop original soundtracks, Knockin' on Heaven's Door - Ask DNA - EP and Cowboy Bebop: Knockin' on Heaven's Door - O.S.T Future Blues, the region is also getting the Escaflowne soundtracks, including the 3 OSTs from Kanno and ex-husband Hajime Mizoguchi, the "Lovers Only" album, the   Maaya Sakamoto opening single, and the movie soundtrack.

You can see a complete list of FlyingDog releases here.