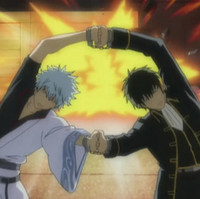 This morning, the great fan chronicler of Gintama merchandise,@habisan Tweeted a reminder that today yaoi today, accompanied by a screenshot of one of the series' fake Gintoki x Hijikata DVD covers, featured in the year end segments on episodes 92, 145, and 193. 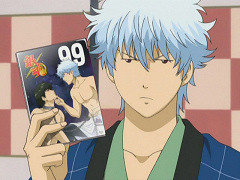 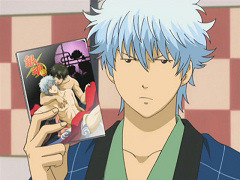 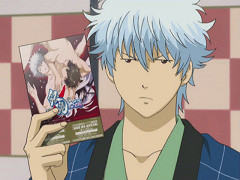 In Japanese, a short reading of "801" can be reading 8 as "ya," 0 as a western influenced "o" and 1 as "i." So, the "yaoi" numeric sequence has become otaku shorthand for the genre of male romance media and, following that logic, in countries that list the date month-day, August 1st is yaoi day!

Perhaps the best known representation of "801" is from Ajiko Kojima's yaoi fangirl comedy Tonari no 801-chan. The four panel comic strip follows the relationship between a 28-year-old otaku and his 22-year-old girlfriend, whose yaoi obsession crawls out of her body as a fuzzy green monster. 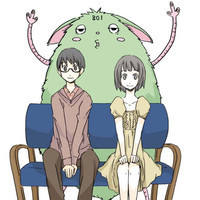 Between Free!, Attack on Titan, and even the lines of the Japanese run Sherlock, it's a great time for yaoi fans. It seemsed like the majority of the AoT material at the decidare Fall of Well doujinshi event focused on Eren x Levi, and that was before the latter was before the latter became a major fact in the anime.

Yaoi fans also have a new season of Kuroko's Basketball to look forward to.

Despite all this inspiration material, spokeswoman Ajiko Kojima has been very quietly lately. After releasing a collection of her 801-Chan+ manga, about balancing yaoi mania with marriage and raising a baby and showing up for Comiket last winter, she apologized that she was slowing down her blogging and other work to due to the demands of motherhood. 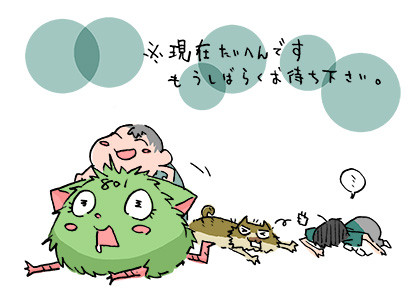