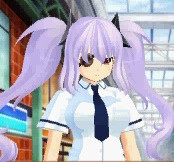 XSEED Games has good news for fans in the west awaiting the 3DS exploits of Senran Kagura's busty ninja. The publisher announced plans to release Senran Kagura Burst on Nintendo 3DS in North America as a digital download this fall.

The side-scrolling action game was originally released in Japan in August of last year, and the franchise has seen a number of spin-off media, from a TV anime to to various manga series.

Senran Kagura Burst is set in an academy which serves as a front for an underground school where female students are secretly trained in the art of ninjutsu. Consisting of two separate storylines, Skirting Shadows introduces players to the “good shinobi” of Hanzō Academy while its counterpart, Crimson Girls, turns the tables to tell the same tale from the rival Hebijo Academy’s point of view.

Players assume control of the five primary female characters in each academy who aspire to become full-fledged shinobi. Within the “Ninja Room” hub located in each academy, character interactions reveal the thoughts and feelings of the students before and after each game mission. Novel-style story scenes then precede other missions, offering a deeper look into the world of Senran Kagura.

Senran Kagura Burst will include the original Japanese voice-overs with English subtitles.