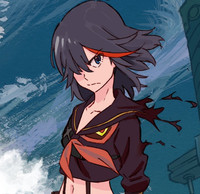 Synopsis:
The story centers around two fiercely fighting schoolgirls, Ryuuko Matoi and Satsuki Kiryuuin. On a campus ruled by force, a transfer student wielding a Basami sword brings about upheaval.