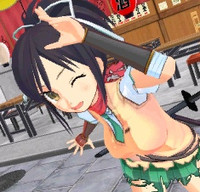 Some folks were disappointed that our post confirming the North American release of Senran Kagura Burst didn't have a clever play on words referring to the ninja action game's busty nature, so we fixed it this time around. Not only will Senran Kagura Burst be coming out in Europe, as well, but it will also be getting a physical release.

While XSEED Games will only be releasing Burst digitally in North America, publisher Zen United is handling distribution in Europe, where it's set to hit both retail and the 3DS eShop in Q1 2014.

Here's the description from the press release:

A frenetic, high-speed, side-scrolling beat ‘em up, SENRAN KAGURA Burst combines sexy female ninjas with an accomplished fighting system and a superb story. SENRAN KAGURA Burst is the starting point for those unfamiliar with the series, with two games’ worth of content. Included within is the entire original SENRAN KAGURA game, only ever released in Japan, plus a bonus second story that’s equal in size and scope to the first. In each story, players assume control of five female ninjas from one of two competing Academies – rival schools which covertly train students in the art of ninjitsu.

Those looking forward to the digital-only release in North America can clear their gaming slate for fall. As previously reported, Senran Kagura Burst will include the original Japanese voice-overs with English subtitles.