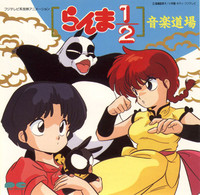 At this weekend's Otakon, Viz Media announced that they will be bringing back what was once on the most popular series in anime. Martial arts sex comedy Ranma 1/2 is set to return, with the anime coming to Neon Alley, Blu-ray and DVD, along with new reprints of the manga. Ranma 1/2 programming is also being planned for the upcoming New York Comic Con.

Finally, they announced that  Gurren Lagann is coming to their Neon Alley streaming service this fall.