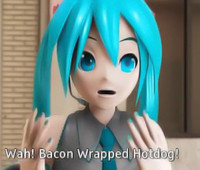 The English version of Hatsune Miku V3 English is now slated to be available for download on August 31st 2013. To preview this, Miku's 39ch posted a sample the second of official demo song. And unlike, the earlier "Six Greetings" by Kikuo, which only featured English phrases, "Let the Music Speak" by Munich-based artist Dan Corches (a.k.a. Fid Rizz) extensively exercises Miku's English language voices.

Featured tracks include Coming Together by BSC a.k.a. kuni