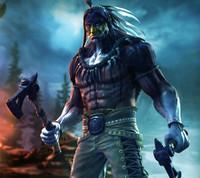 Back when the first video of Glacius arrived, a teaser image heralded the coming of a contender Killer Instinct fans could easily guess. Sure enough, the fourth addition to the fightin' franchise revival is none other than Chief Thunder, and IGN recently posted a video introduction.

Developed by Double Helix Games, Killer Instinct is a free-to-play exclusive coming to Xbox One. According to a tweet from designer David Verfaillie, the next character reveal will take place at Germany's gamescom. Any guesses as to who's next?