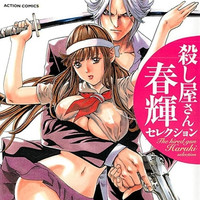 After announcing the main voice cast yesterday, Opera House, the production company of the upcoming TV anime adaptation of Tamachiku's four-panel comedy manga The Hired Gun/Koroshiya-san, posted a 1-minute promotional video on its official YouTube channel. The PV introduces the main characters and their voice cast with the original manga arts. You can also check the theme song of the anime "the end" performed by Japanese visual-kei band Mix Speaker's,Inc for the first time. The CD single of the song will be released in Japan on November 20. The anime is scheduled to be broadcasted on TV Saitama, a terrestrial commercial TV station in Saitama Prefecture.