Ghibli returns to Disney after last movie was handled by GKids 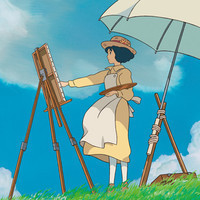 After the North American release of the last Studio Ghibli movie, From Up on Poppy Hill, was handled by GKids, the studio is back with Disney for cofounder Hayao Miyzaki's new The Wind Rises. Cartoon Brew reports that an initial theatrical distribution announcement was made, with more plans to come at a later date.

In 2011, GKids signed a deal with Studio Ghibli for theatrical and non-theatrical distribution rights in North America to 13 Studio Ghibli films released between 1984 and 2002, including Princess Mononoke, My Neighbor Totoro, Castle in the Sky, and Spirited Away, and followed that with the first run theatrical rights to From Up on Poppy Hill.

Prior to that, Ghibli movies had been part of distribution deals with Disney going back to 1996.

The Wind Rises made its North American premiere August 20th at the Toronto International Film Festival.

Based on his manga and a novel by Tatsuo Hori, the film explores the life of World War II Zero fighter designer Jirō Horikoshi's life, with Evangelion's Hideaki Anno voicing the character.