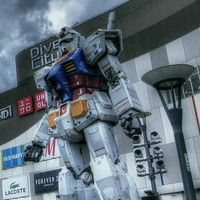 For a limited time, visitors to the Odaiba Gundam statue could walk through the legs of the full scale statue, and videographer darwinfish used the occasion to return to the site for the first time in a month for a new time lapse video.

Meanwhile, another 20 meter statue is being built at Haneda Airport in Tokyo as part of the “Cool-J” project