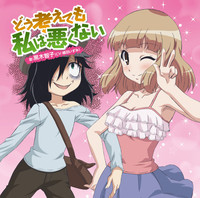 The Watamote opening and ending singles are out in Japan today, and the latter features Izumi Kitta singing the end song as Tomoko Kuroki, the Hatsune Miku version of "Natsu Matsuri" from episode six, and an altnerate version of the ending, sung by Kana Hanazawa as Yu-Chan.

Get a listen to MediaFactory's preview..