On sale in in September 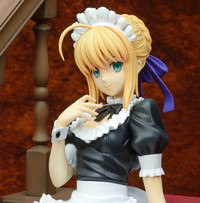 The figure, which depicts Saber sitting on a staircase, is based on an illustration created as a special bonus for the PS Vita edition of “Fate/Stay Night Realta Nua”, and features Saber’s maid outfit from sequel “Fate/Hollow Ataraxia”.

The 240-millimeter-tall figure was sculpted by PMOA, and retails for 10,290 yen. It will be released in September.

The figure also reproduces the staircase on which Saber is sitting in the illustration.
© 2004, 2005 TYPE-MOON