"Majestic" and "Epic in every sense" 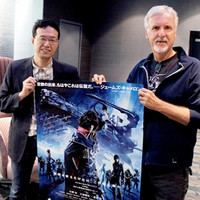 When James Cameron saw the 2D version of Shinji Aramaki's latest full-CG film Space Pirate Captain Harlock this spring, he agreed to give his words "Unprecedented quality. This film has already become a legend." as a tagline for the promotional campaign for the film. After the release in Japan, the director Aramaki flew to Los Angeles with the 3D version of the film and finally showed it to Cameron at his studio. Right after the screening, Cameron shook Aramaki's hand and said, "It was fantastic. Congratulations." Accordingly, Cameron praised the film with the following words (no complete sentences were introduced in the original article);

"Epic in every sense"

"Its style and difference are its strength"

The film was released in Japan on September 7. Despite Cameron's praise, it earned a very disappointing

previous weekend on only 64 screens.