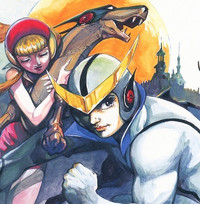 While it was mentioned during Anime Expo as part of Sentai Filmworks' licensing deal with Tasunoko Production, Sentai formally announced its acquisition of Casshan at Anime Weekend Atlanta. The classic 1973 series will arrive soon through select digital outlets, with a subtitled DVD and Blu-ray release to follow in 2014.

The 35-episode anime was created by Tatsuo Yoshida, and features contributions from some big names, including character designs by Final Fantasy's Yoshitaka Amano, as well as storyboarding and episode direction by Mobile Suit Gundam's Yoshiyuki Tomino.

The synopsis from Sentai's press release:

When lightning strikes the prototype android BK-1, a new horror is unleashed on the world as the resulting monster Buraiking begins taking over all other robots on Earth, setting them against their creators in a massive orgy of planet-wide destruction!  With humanity helpless in the face of the new Neoroiders and their mechanical armies, mankind’s only hope may lie in the hands of Tetsuya Azuma, son of the creator of BK1, who transfers his consciousness into an android body to become a Neoroider himself… the ultimate robot fighter: Casshan!  Now, together with his robot dog Flender and the beautiful Luna Uetsuki, the daughter of another scientist and wielder of the most robot-lethal gun on the planet, Casshan is on a mission to clear his father’s name, avenge his mother’s death, and save the Earth from the iron clutches of Buraiking!  But things aren’t going to be easy, not when you’re three against thousands, and Buraiking has some shocking surprises in store that will rip Casshan’s world in two!  It’s the ultimate blast from the past as the battle for the future pits the good bots against the bad in CASSHAN!