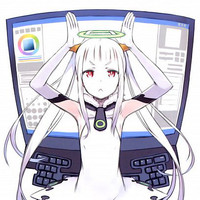 This season, we're seeing anime based on light novel series named My Mental Choices Are Completely Interfering With My School Romantic Comedy and I Couldn’t Become a Hero, So I Reluctantly Decided to Get a Job. As risibility verbose as those are, as as much as making up light novel titles has become a net parlor game, Keiichi Sigsawa, author of the Kino's Journey might have it all beat with his new work.

He actually seems to be going for something meta more than he is trying to win a bet...

"You're the Most Popular Light Novel Author at the All Boy's High School, but you're Being Strangled by your Junior who is also a Voice Actress? 。―Time to Play―"

The lead is novelist making his Dengeki Bunko debut who get into a dicey relationship with a rookie seiyuu.