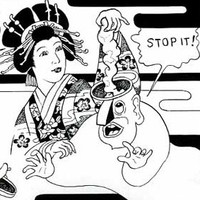 Shigeru Sugiura began working in the '30s and hit a peak of popularity in the '50s before fading with the rise of weekly manga magazines. He captured a new, older audience in the '70s, with his avant-garde surrealism and interpretation of yokai spirits inspiring creators like Studio Ghibli's Hayao Miyazaki and Isao Takahata, as well as novelist Yasutaka Tsutsui, creator of Paprika and The Girl Who Leapt Through Time.

His adaptation of Last of the Mohicans was released in North America by PictureBox.