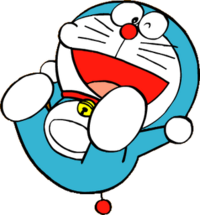 Finally, English readers who missed the hard to find bilingual editions have a chance to read Fujiko Fujio's Doraemon, the classic manga about underachieving boy Nobita Nobi and the blue robot cat sent by his descendant in the 22nd century. A digital edition was added to Amazon's Kindle on November 22nd.

Plans for Fujiko F. Fujio Productions, in conjunction with Japanese multi-media producer Voyager Japan and translation company AltJapan, to bring the manga to region were first announced at this summer's San Diego Comic Con. The new translation is also planned for other digital formats such as Apple iBookstore, Google Play, and Nook, as well as other languages.

Three episode installments are priced at $2.99.

Asahi Shimbun notes that Doraemon’s name will remain intact in the English edition. But to help introduce the series to English-speaking readers, “Nobita” is renamed “Noby” and “Gian” (from Giant) is “Big G.”

Doraemon’s favorite “dorayaki” sweet pancake is translated into “fudgy pudgy pie,” and the cat’s "secret gadgets from the future" have different names, such as “Hopter" for “Takekopter.”

“It has been pointed out that Nobita’s passive attitude--he always relies on Doraemon--would not appeal to the U.S. readers,” said Ryutaro Mihara, former industry ministry official who has studied Japan’s pop culture in the United States.

However, senior Fujiko Pro Co. official Yoshihiko Shinoda said the time has some to bring the series to North America “With the manga’s popularity having been established in Spanish-speaking countries, we thought it was time to move to the United States, where the Hispanic population is increasing.”

Mitsuru Saito, who heads the Doraemon Room at Shogakukan, says “Any child can understand Nobita. I want U.S. readers to know the manga series.”

Tags
doraemon
« Previous Post
VIDEO: "Anohana the Movie: The Flower We Saw That Day" Coming to Theaters in the U.S.
Next Post »
"Blue Exorcist" Anime to Run on Toonami
Other Top News
5 Comments
Sort by: