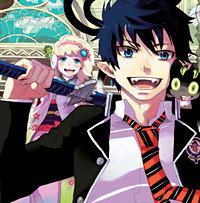 With Blue Exorcist joining Cartoon Network's Toonami block in March, Aniplex has posted a special announcement promo for the series.

Assiah: the realm of humans. Gehenna: the realm of demons. Normally, these two dimensions would never intersect, but having possessed all material substances, the demons are now intruding on the material world. But among the human race, there are those who can exorcise such demons - the Exorcists.

Based on the manga by Kazue Kato (published on Jump Square by Shueisha), Blue Exorcist  successfully depicts a hero, Rin Okumura, an energetic, yet naïve young man who aims to become the  ultimate exorcist. The manga has been made into animation in the hands of Japan’s acclaimed staff  including director Tensai Okamura (Wolf’s Rain, Darker Than Black) and Animation Studio A-1 Pictures (Sword Art Online, Magi: The Labyrinth of Magic, Oreimo 2).