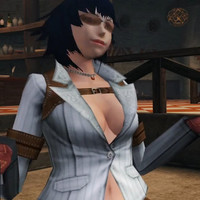 After the recent Fate/stay night, Hatsune Miku and Fire Emblem team-ups, it's Capcom x Capcom with Devil May Cry slated to be next Monster Hunter Frontier G collaboration.

Between now and Christmas, Japanese MHF-G players can get Dante’s costume if they're sword users level seven or above, as well as weapons Rebellion I and Rebellion Kai I. Gunners can ger Lady with Jealousy I and Epidemic I.

Monster Hunter Frontier G is a subscription based, online MH. The game was released for Xbox 360 and PC in April. It hit to PlayStation 3 November 20th and Vita in 2014. A Wii U version is also due this month.