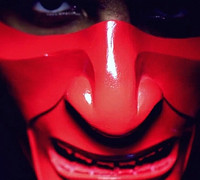 “Is there a Santa Claus?” Well, the jury is still out on that one. However, there IS a bold Miami based otaku-gamer-geek rapper named CASHAMILL ANIME BOY who has chosen this most special of holidays to bequeath the new video to his new song “Overkill” to us. Watch below!

As you might have figured by now, CASHAMILL ANIME BOY is a force unto himself who has released several albums worth of material (including stirring odes to Godzilla) and maintains a very lively presence on Twitter. Peer into the windmills of his mind at his official website.

Patrick Macias is editor in chief of Crunchyroll News. He is also the editor of Otaku USA magazine. Check out his blog at http://patrickmacias.blogs.com