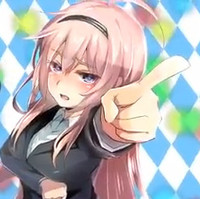 In March 2012, Vocaloid producer Takebo3  released their definitive version of hit Hatsune Miku music video "Rorikon de Yokatta~" aka  "Glad You're a Lolicon~," a love story about a woman frustrated about looking younger than her junior. Now Takebo3 is back, this time with Megurine Luka and response song "Lolicon is no good!"