On display at the Tokyo Auto Salon 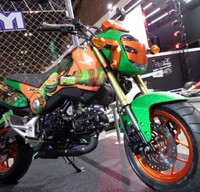 At the Tokyo Auto Salon 2014, held in conjunction with NAPAC at Chiba’s Makuhari Messe from January 10th to 12th, Honda exhibited a series of customized concept Grom motorcycles based on the Teenage Mutant Ninja Turtles.

The Honda Grom (also marketed outside of Japan as the MSX125) is a 125cc motorcycle, targeted at the youth market and popular due to its unique style and coloring. The motorcycles on display at the event were based on the four main characters of generation-spanning media franchise Teenage Mutant Turtles, painted red, blue, orange, and purple, and featuring green accents to represent characters Raphael, Leonardo, Michelangelo, and Donatello, respectively.