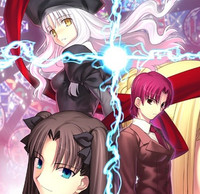 Visual novel Fate/stay night made the leap to PS Vita in Japan in 2012, and now its sequel, Fate/hollow ataraxia, is ready to follow suit. While we don't have a release window yet, Dengeki PlayStation reports that a Vita port is in the works with full voice acting.

Fate/hollow ataraxia is set six months after the events of Fate/stay night, and follows Mages' Association member Bazett Fraga McRemitz and her new servant Avenger as they set off to win the fifth Holy Grail War.