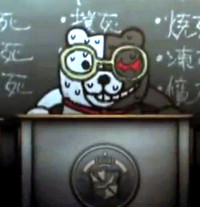 NIS America shared a new trailer for Danganronpa: Trigger Happy Havoc, the revised and revamped PS Vita port of the 2010 PSP original. Watch as the sinister Monokuma breaks things down in the video below.

Hope's Peak Academy is home to Japan's best and brightest high school students—the beacons of hope for the future. But that hope suddenly dies when Makoto Naegi and his classmates find themselves imprisoned in the school, cut off from the outside world and subject to the whims of a strange, murderous little bear named Monokuma. He pits the students against each other, promising freedom to anyone who can murder a fellow classmate and get away with it. It's up to you to find out who Monokuma really is, and why you've been taken from the world you once knew. But be careful what you wish for—sometimes there's nothing more deadly than the truth...