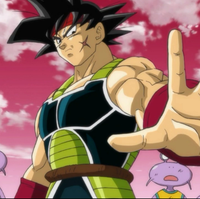 Dragon Ball creator Akira Toriyama has revealed the identity of series hero Goku's mother in the  March 2014 issue of Saikyo Jump ahead of her appearance in a bonus manga to be included with the April 4th Japanese release of the collection of his recent one volume work Jaco the Galactic Patrolman.

Toriyama introduces the character. named Gine, saying that she was a particularly gentle representative of the Saiyan warrior alien race. She was a member of the same squad as Goku's father, Bardock and the two developed an unconventional love after she's protected on the battlefield by Bardock.

via orendsrange and The Dao of Dragon Ball