Opening in Kawasaki for one year 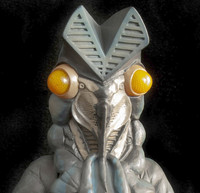 In mid-March, a theme bar based on monsters from the Ultraman superhero TV series will open. Called “Kaiju Sakaba”, the bar will remain open for one year.

The bar was conceived of as a place where the kaiju who battle the heroes of Ultraman can meet to forget their defeats and plan new evil schemes, and will be open to humans for one year only. While no monsters will be appearing due to the presence of humans, traces of them still remain at the bar, including kaiju who want to cause trouble, invade the earth, destroy the heroes, or fight to the death. Every aspect of the bar, from the menu to the decor, is influenced by the world of kaiju, and will appeal to adults who are still young at heart and want to drink and have fun in a unique environment.