Staff and cast from the TV series return for the new adventures of the singing, dancing 765Pro girls 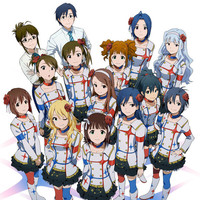 As The IdolmAster Movie: Kagayaki no Mukogawa e! ("To the Glittering Side") anime movie heads into its second week in Japanese theaters, director Atsushi Nishigori wants fan to be really hyped up to see the 765Pro girls on the big screen, so a new promo shows a bit of them performing the feature's theme.