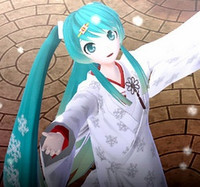 Sega announced more release details for Hatsune Miku: Project Diva f, which is bringing the rhythm game fun to PS Vita in the west. The portable entry will debut in North America on March 4, with Europe following not too far behind on March 12.

The downloadable game will be priced at $29.99.

Players who picked up the PlayStation 3 version of Project Diva F can also look forward to a DLC cross-buy promotion. If you already own the Snow Miku 2013 and the Extra Character Modules DLC then you'll unlock them for free automatically after purchasing the PS Vita version.