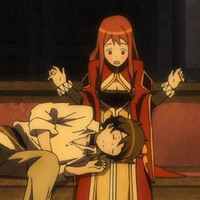 A Home video release is planned, but no time frame is mentioned.

Names can be deceiving, something the warrior known as Hero quickly discovers when he storms the castle of the dread Demon King that mankind has fought for 15 years.  For one thing, the “King” turns out to be a Queen!  Even more shocking, though, is that she’s been waiting for him with a very unexpected proposal. It would be bad for BOTH sides if the war was to end immediately, she points out, as without a common enemy, the individual factions of the winning side are certain to turn on each other in a new series of civil wars.  However, she has a plan to end the wars, bring democracy and advanced knowledge to the humans, and ensure lasting prosperity for both sides, no matter who “wins.”  But to accomplish this, she needs a collaborator on the human side, and she’s chosen Hero as the one partner she can trust!   Is it a deal with the devil, or mankind’s only hope for lasting peace?   The traditional rules of Swords and Sorcery are completely rewritten as the “good guy” and the “bad girl” join forces to save the world in MAOYU –  ARCHENEMY & HERO!

Tags
maoyu
« Previous Post
Get "Pokémon X" or "Y" for Free by Registering 3DS System and Game
Next Post »
VIDEO: The Full Trailer for "Godzilla" Stomps into View
Other Top News
31 Comments
Sort by: