"Pokémon" TV Anime and Films Head to Netflix on March 1

Classic first season and more to be available in Netflix regions 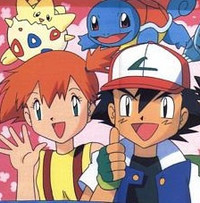 Update: I'm a dummy and didn't realize they actually call the first season Indigo League. Fixed all references to it.

The Pokémon Company and Netflix are teaming up to bring a bunch of Pokémon anime to the streaming service, with a launch planned for March 1. Series include the classic first TV anime season, Pokémon: Indigo League, as well as Pokémon: Black & White, and two feature-length films.