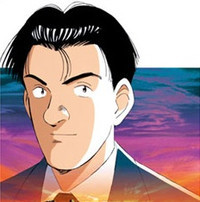 The 12-volume release is scheduled to launch in print in December under the VIZ Signature imprint. This released will be rated ‘T+’ for Older Teens and carry an MSRP of $19.99 U.S. /$22.99 CAN. Each paperback volume will receive a deluxe treatment, including 18 pages of full-color artwork. In addition to publishing it North America, VIZ Media will also release it in print in the United Kingdom and Australia.

The riveting detective drama introduces Taichi Hiraga-Keaton, an archeology professor and part-time insurance investigator known for his successful and unorthodox methods of investigation. The son of a Japanese zoologist and an English noblewoman, educated in archaeology at Oxford and a former member of the SAS, Master Keaton uses his knowledge and combat training to uncover buried secrets, thwart would-be villains, and pursue the truth. The manga series was originally published in Japan between 1988 and 1994 in Big Comic Original magazine and also inspired a popular 39-episode anime adaptation.