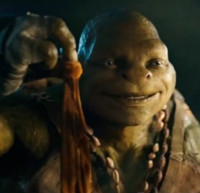 You're either gonna love this, hate this, or not give a rip, which I guess could be said about literally anything in the world. The Michael Bay produced Teenage Mutant Ninja Turtles flick has its first preview, so watch below to see which category you fall into, if any.

Directed by Jonathan Liebesman (The Texas Chainsaw Massacre: The Beginning, Wrath of the Titans), the latest live-action take on TMNT switches up the origin story and more when it arrives in theaters later this year.