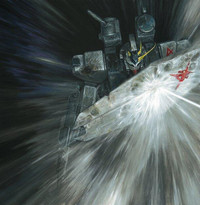 Recent rumors that effects studio Legacy Effects (a Iron-Man 2, Avatar, Thor, Avengers) were "shopping for shooting locations" in the Philippines, were compounded by Asian showbiz rumor site KDramaStars.com's post post that a Japanese production team was involved, leading to buzz that a live-action Gundam movie might be in active development.

Ookaze no Okorusama, representing several Japanese creators, will be working with Legacy Effects with the goal of bringing “movies based on Japanese manga and animation from Hollywood to the world."

Rather than confirming a Gundam movie, the first joint press conference announced plans to adapt children's literature published by Iwanami Shoten, with author Atsuo Saito, known for the book The Adventurers - Gamba and His 15 Companions, at the event.