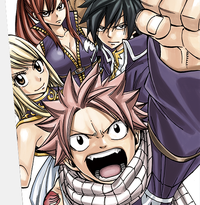 FUNimation has announced that the new Fairy Tail anime has joined their spring simulcast lineup. A confirmed date for its premiere will be announced soon. Its Japanese launch is on April 5th.

synopsis:
The most powerful wizards in the Fiore Kingdom are back in this continuation of the hit series! Join Natsu, Happy, and the rest of their teammates as they keep doing what they do best: beating up dark guilds and spreading destruction across the land. This magic-filled simulcast is the perfect place for new fans to join in on the adventure!