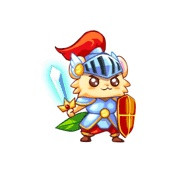 Fans of classic Sega series Wonder Boy/Monster World will get a kick out of the turn the sequel to 2010 PSP/Vita/iOS shoot 'em up Flying Hamster has taken. Flying Hamster II: Knight of the Golden Seed went up on Kickstarter a few days ago, and the trailer shows a platforming adventure that is very much in the spirit of Wonder Boy and its follow-ups.

Developer Game Atelier hopes to raise $150,000 for a Steam release, with more platforms to be added if stretch goals are met. As of this writing Flying Hamster II is at a little over $7k with 28 days to go, so there's plenty of time to make this adventure a reality.