Bandai Namco Games' throws a 3D fighter into the mix 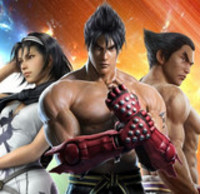 Anyone who was thrown off by the lack of 3D fighters set for this year's EVO 2014 tournament lineup will be pleased by the latest announcement. Eve co-founder Joey "Mr. Wizard" Cuellar was invited on a special presentation of iPlayWinner's The Fray!, where he announced that Tekken Tag Tournament 2 will be joining the lineup of competing fighters.

In addition to that, Bandai Namco Games will be joining EVO 2014 as a primary sponsor.