"Attack on Titan" to Run on Cartoon Network 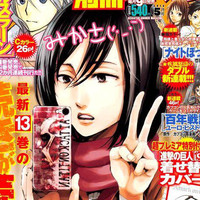 FUNimation and Toonami/Adult Swim's LICH KING DEMARCO teased big news on tonight's broadcast. Actually, the news was titanic. Specifically, Attack on Titan will be broadcast on the Cartoon Network block starting May 3rd.

#toonami fans- You probably want to watch tonight. And probably even tune in for Adult Swim proper earlier on, too. #lichadvice

#AttackOnTitan to air on Toonami block starting May 3rd. Pass it on! http://t.co/a5OVaTBcIC pic.twitter.com/xc6QqFNkR5