Adaptation of Yusuke Yamada novel hits Japan on May 10 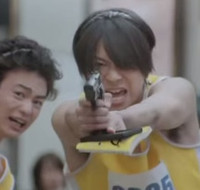 Next up is Live, a survival thriller based on the 2005 novel by Yusuke Yamada. You can see a full preview of the film—which involves a televised "death race," with participants forced to compete knowing their loved ones will be killed if they refuse—below.

Live premieres in Japan on May 10.