Fighter heads to Europe on April 25, North America on April 29 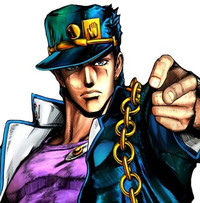 You might have had a chance recently to get your hands on some of JoJo's Bizarre Adventure: All-Star Battle thanks to the demo. Following the demo trailer from a few days ago, Bandai Namco Games is back with a look at Stardust Crusaders protagonist Jotaro Kujo's moves.