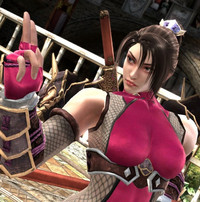 Bandai Namco's free-to-play SoulCalibur: Lost Swords is getting another addition to its roster with the announcement of Taki's return. "She who seals off evil" joins the lineup this month, and you can see her in action in the trailer below.

Lost Swords originally made its debut on PlayStation 3 in Japan back in February, and is set for a spring release in the west.