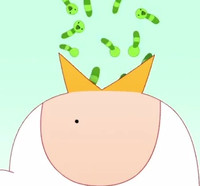 Masaaki Yuasa—director of Mind Game, Kick-Heart, and the currently-running adaptation of Taiyo Matsumoto's Ping Pong manga—has been keeping himself busy. At the Adventure Time panel during this past weekend's WonderCon it was announced that Yuasa would write, storyboard, and direct an episode of the Cartoon Network series, produced in Japan with no outside supervision from the Adventure Time team.

The episode isn't considered canon, for anyone wondering, but Vulture got an exclusive preview and you can see some of what Yuasa cooked up for "Food Chain" below.