Anime competes with "Pacific Rim" and "Gravity" for media awards 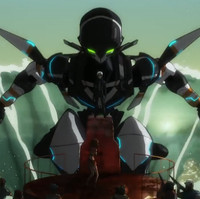 Selections for this year's 45th Seiun Awards have been announced, with voting open to registered participants of the Science Fiction Convention between now and June 15th. Anime titles Gargantia, Space Battleship Yamato 2199, Arpeggio of Blue Steel, Psycho-Pass, Girls und Panzer and Patema Inverted will be competing against the movies Gravity and Pacific Rim for the media award.

Bodacious Space Pirates won last year and Madoka Magica the year before that.

Gantz, Ponko Of The Stars And Reiko Of The Tofu Shop, The World of Narue, and Akaneko no Akuma are up for the manga prize. Yukinobu Hoshino's Inherit the Stars won last year.

Hideo Azuma, known for his sci-fi lolicon work, has been nominated in the non-fiction category for his latest Disappearance Diary autobiographical manga.

Katsuya Terada (the original Blood: The Last Vampire character designer) is among the nominated artists.

KanColle has been nominated for the free category.

"Seiun" is the Japanese word for "nebula", but the award is not related to the American Nebula Award. Professional works released in the previous calendar year are eligible for vote and entire series are eligible once they are finished. The list of selections is picked by the Federation of Science Fiction Fan Groups, but write-up votes are allowed.

Winners will be announced at the 53rd convention on July 19th. See the full list at http://www.sf-fan.gr.jp/awards/2014result.html