Happy 30th Anniversary to The Transformers!

Celebrate with a look at the first ad for the series 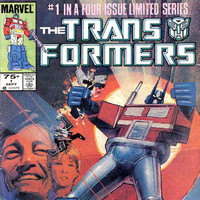 On May 8th, 1984 the first issue of Marvel's Transformers comic hit newstands. This became an ongoing series, which, running through 1991, has been the robots in disguise's longest series. Predating the toys, it was also the first Transformers product released.

You can read a 1984 Usenet review of the issue here.

The series has a Japanese connection in that it featured rebranded toys from Takara's Diaclone and Microman lines. The former, which featured work by Macross' Shoji Kawamori and Kazutaka Miyatake, included many of the Autobot cars, the  Decepticon planes, the Constructicons, Dinobots, and Insecticons. Microman originated Megatron, Soundwave, and the Autobot mini-cars such as Bumblebee, Cliffjumper and Brawn.

Celebrate with a look at the first ad for the series!

Tags
transformers
« Previous Post
"R-Type Dimensions" Heads to PlayStation 3 This Month
Next Post »
Disney XD to Start Airing "Doraemon" Anime in the US This Summer
Other Top News
28 Comments
Sort by:

Mazinger Z and Transformers Face off in New Comic