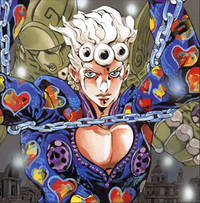 Running in Shonen Jump from 1995 to 1999, the phase moves the action to Naples in the year 2001, where the latest JoJo, Giorno Giovana, aims to become a mafia boss.

In the campaign's latest ad, they promote the new issue of Ultra Jump, the magazine running part VIII, JoJolion.

One of the earlier promos...

Diamond is Unbreakable ran in Shonen Jump from 1992 to 1995. In contrast to global trotting of the popular part III, Stardust Crusader, super powered horror mystery Diamond stayed in the fictional town of Morioh - an earthquake affected version of which is now the location of the latest incarnation of the series, JoJoLion.