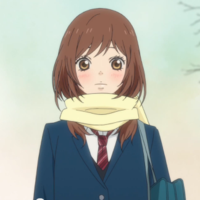 The TV anime adaptation is animated by internationally accliamed studio Production I.G (Ghost in the Shell, Kuroko's Basketball), and Ai Yoshimura, who directed the 2013 TV anime adaptation of Wataru Watari's popular light novel My Teen Romantic Comedy SNAFU for Brain's Base, serves as the series director. It is scheduled to premiere on Tokyo MX and MBS on July 7, then followed by BS11 next day.

high school days, she was not good at dealing with boys, except Kou Tanaka (CV: Yuuki Kaji) from the class

next-door. He transferred to a different school during summer vacation. In her high school, she meets again

her first love Kou Mabuchi (his family name is changed due to his parents' divorce), but his character is totally

different from it used to be. What did happen to him in the three years she didn't know? Will the love story of